The Fisherwomen, Chevron and the Leaking Pipe 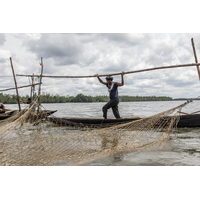 Big Oil has a filthy legacy in the Niger Delta region of Nigeria. One prominent environmentalist said: “They are moving out and leaving all the mess behind.”

GBARAMATU, Nigeria — When the tide rose under the rickety wooden house-on-stilts of Onitsha Joseph, a fisherwoman who lives above the twisting rivers of the Niger Delta in southern Nigeria, it brought a slick of crude oil.

Before long, she saw dead fish floating on oil inches thick, and fishing — her livelihood — became impossible. The fumes were so strong at one point that Ms. Joseph fainted. She was rushed to the hospital on a speedboat.

At first, she had no idea where it was coming from. Then, out with some other fisherwomen one day in February, she said they spotted something bubbling up to the river’s surface. Ms. Joseph steered her oil-blackened canoe closer.

Far below her snaked a pipe. The American oil giant Chevron laid that pipe 46 years before, according to many neighbors of Ms. Joseph who were there at the time, and now, they said, it was leaking.

So began a battle between Chevron and hundreds of fisherwomen in the Niger Delta. Chevron denies that oil was spilling from its pipes. But the women insisted that this was just another instance of oil companies refusing to take responsibility, and decided to take the fight to the oil company’s doors.

“You want to kill us with your oil,” Ms. Joseph said, growing emotional. “We’ll come to you so you can kill us yourselves. In person.”

Oil companies like Chevron, Shell and Eni have made billions in profits in the vast Niger Delta region in the last decades. But now some are pulling out — and they are leaving utter ruin in their wake, according to government monitors and environmental and human rights organizations. The delicate ecosystem of the Niger Delta, once teeming with plant and animal life, is today one of the most polluted places on the planet.