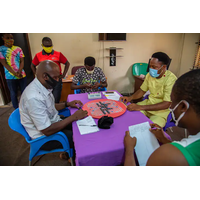 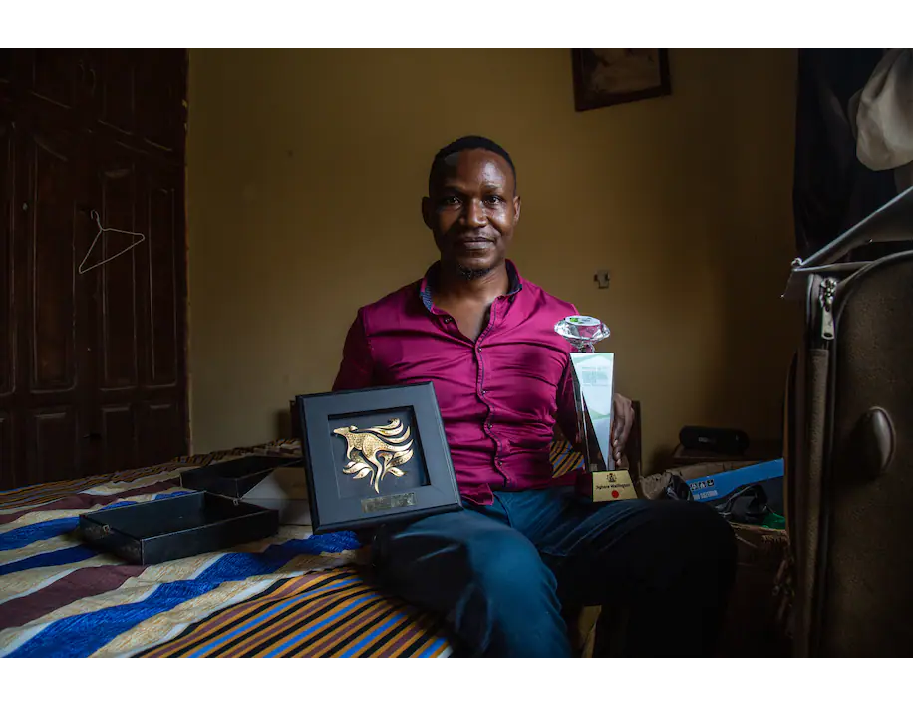 LAGOS, Nigeria — On the 300th morning of waking up in a friend’s spare bedroom, the Scrabble champion pondered his next move and fixated on one word.

It had been a year since the pandemic halted Nigeria’s high-stakes board game tournaments, crushed his business and forced Wellington Jighere, 38, to rethink his life. Two decades of singular focus had brought him to this limbo, perched on a striped comforter, next to a pair of suitcases and a gold trophy, with only $53 in his bank account.

He had been a nerdy celebrity since becoming the first Nigerian — and the first African — to win the World Scrabble Championship in 2015. The victory came with a $10,000 prize, a rush of attention and a call from the president of Nigeria.

Now defective invaded his mind, again and again, as he applied for jobs with no luck and reflected on the past: Should I have learned different skills? Networked with more people? Cared less about memorizing the Scrabble dictionary?

The coronavirus revealed how fragile dreams can be, plunging people into cycles of loss and grief, hope and disappointment. In Nigeria — home of the hustle, as Jighere called it — the unemployment rate shot up to 33 percent, one of the highest in the world, and that figure didn’t account for those who made ends meet under the table.

Or on the table, in front of silent crowds, arranging alphabet tiles for the chance to take home thousands of dollars.

Scrabble is recognized as a sport in the country of 211 million, where coaches train vocabulary-obsessed athletes on the state payroll. Nigeria boasts two players ranked within the global top 10, including Jighere.

After his 2015 win, Jighere vowed to build a Scrabble empire. He designed his own board, the WELLYboard, and watched sales climb. He regularly competed in tournaments, winning enough to pay the bills. Next up was supposed to be the National Sports Festival in March 2020 — Nigeria’s version of the Olympics — when plans everywhere started crumbling.

The nation recorded its first dreaded infection and soon locked down. No flights. No parties. No gymnasiums full of Scrabble tables. The National Sports Festival was postponed and postponed. People started playing online, and WELLYboard sales plunged by 70 percent.

Gone was the constant movement, the stylish hotels. Gone was the purpose, the camaraderie, the excitement about the future.

So Jighere sat in the old bedroom of his friend’s daughter on the outskirts of Africa’s biggest city. She had grown up, gotten married and moved out. Shouldn’t he have done the same by now?

Nigeria’s rise to Scrabble superpower began in the 1970s, when college students studying overseas brought home boards from England and the United States.

The game blew up in Olomu, the southern village where Jighere grew up. His older brother crafted a set out of cardboard.

By his teenage years, Jighere could beat anyone in the village. He won a scholarship to attend a better school in a larger city and kept winning, eventually earning a star reputation around the nation’s Scrabble clubs, which number about 500.

The top players ascend to state rosters, pocketing monthly checks to stay in mental shape. Teams train together at camps before major showdowns.

Jighere placed third at the 2007 world championship in India. Eleventh at the 2009 contest in Malaysia.

In 2015, Jighere landed at the international contest in Australia. Jet lag had sabotaged his concentration in some of those matches, so he conditioned for insomnia in the Australia games by playing chess for 24 straight hours before switching to Scrabble. The payoff arrived in five letters for 36 points: felty, like the texture.

Jighere left Perth with a gold trophy in the shape of a kangaroo.

That kangaroo seemed to stare at him as life slowed during the pandemic. Were they both collecting dust?

Maybe it was time to quit, he had thought. He could pivot to something more sustainable and get a flat of his own.

Yet he doubted his resolve even as he typed the words in December: “WELLINGTON QUITS SCRABBLE.”

“There’s hardly a way to make this work,” he wrote on Twitter, “hence this hard but necessary decision to move ahead now that I still have time on my side.”

But the National Sports Festival — that annual gathering of Nigeria’s best players — had been rescheduled for February, and his heart leaped. He could win 1 million Naira, or about $2,600.

Soon Jighere was back at the board, playing against fellow hopefuls, eager to reclaim his throne, happier than he had been in months. Then the competition was canceled, again.

“I’m just trying to find balance,” Jighere said on a March afternoon, recounting the letdown to his friend, “but it’s difficult to move away.”

“It’s addictive,” said Emmanuel Oyeleke, a former player who had ditched the game to open a photo studio. The men were lounging in his bright white office, where an assistant was serving coffee.

Oyeleke’s life after Scrabble looked impressive: tens of thousands of Instagram followers, a sponsorship deal with Canon, a beautiful wife, a baby son.

“Even in the last two months since quitting,” Jighere said, “I still …”

“Find yourself in Scrabble circles?” Oyeleke finished his sentence.

They laughed. Between them sat a Scrabble board.

‘You’re not really quitting, are you?’

The Scrabble champion told himself he would take a desk job. Any desk job.

He applied for openings at a pharmaceutical company, heard no response and worried such opportunities were tacitly reserved for friends of friends.

Jighere needed someone to vouch for him — and quickly. The monthly athlete stipend from his home state, Delta, barely covered food and cabs.

He thought of Ojior Osikhena, a veteran Scrabble star who had retired from an oil company. The engineer had been one of his mentors for years.

Osikhena saw the game as a healthy influence on Nigeria’s youth — a way to learn strategy and discipline — so he sponsored private contests, providing cash for prizes. If anyone knew how Scrabble skills translated to the workplace, it was Osikhena. Jighere decided to pay him a visit and ask if his former employer was hiring.

“World champ!” the older man said as he opened the door.

A refuge like this had never felt further from reach. Osikhena’s father was a professor in Georgia, giving his family the kind of connections and experiences that can make a résumé stand out.

Jighere worried — often aloud — that Nigerians who started at the bottom of the economic ladder were practically doomed to languish there. It was a popular belief: Even before the pandemic, a 2018 Pew survey found that 45 percent of adults in the country were striving to move away.

“You’re not really quitting, are you?” Osikhena asked.

Jighere said he didn’t feel like a world champ. He felt defective. And he was afraid that, if he did not stop playing, he would never get unstuck from this rut.

“I haven’t been able to develop myself personally,” Jighere said, voice breaking, “and I blame my over-devotion to Scrabble.”

“Only a few players in the entire world have the kind of vision you have for the board,” he said. “You can repackage that.”

Harness your brand, the elder advised. Start a YouTube channel with tips and tricks. Become a sportscaster. Host online games.

Across town, two of their Scrabble buddies were competing to see who could win the most matches out of 10. It would be an all-day affair, and Osikhena had donated a wad of cash for the victor.

The men pulled out their phones.

“This epic cage fight kicks off 10am prompt,” wrote someone called “the Scrabbler” who was narrating the event on WhatsApp.

Jighere couldn’t bring himself to ask Osikhena about a job at the oil company. Instead, he thanked him for the pep talk and hopped into a car to the epic cage fight.

The players hunched over a plastic table in a cramped office with barred windows. A few spectators hovered nearby, snapping photos. A man in a Nigeria basketball jersey kept score.

They all greeted Jighere with fist bumps. He stayed until nightfall, watching the action, itching to jump in.

After the games, the men went out for beers, and Jighere volunteered to play the winner in a future round.

Days later, his phone buzzed — a text from his Scrabble coach.

The National Sports Festival had officially been rescheduled for April.

Oris Aigbokhaevbolo in Lagos, Nigeria, contributed to this report.