A Brief History of Peace Corps and VSO Nigeria

The following articles describe FON's relationship with VSO (Volunteer Service Overseas) until 2015 when VSO went dark on us and we found other organizations to support in Nigeria.  The first article offers an overview of Peace Corps and VSO in Nigeria.

How does a North American-based nonprofit such as Friends of Nigeria (FON) keep in touch with development needs of an African nation so we can provide the “on the ground” assistance we’re passionate about?

FON was founded by Returned Peace Corps Volunteers Cathy Onyemelukwe, Nigeria 4, and Peter Hansen, Nigeria 27, but Peace Corps has been all but missing from Nigeria since not long after the Biafran War of 1967. Fortunately, grassroots development is alive and thriving in Nigeria thanks to VSO, a non-governmental agency based in Britain that receives some, but dwindling, government support.The rest of VSO’s funding is raised from the public, corporations — and organizations such as FON. Since 1958, VSO International, formerly known as Voluntary Service, has deployed well over 200,000 volunteers to more than 25 countries including Nigeria, often under conditions that have prompted other service organizations to suspend or withdraw operations. While volunteers in both Peace Corps and VSO 50 years ago were largely young people from the United States or Britain, VSO International volunteers are now of all ages and may come from countries such as Ireland, The Netherlands, Germany or, of course, the UK itself. Or they may, just as likely, come from emerging nations such as the Philippines, Kenya, Uganda or India. Known as lateral volunteerism, this flow of expertise among a variety of countries is helping to tear down the last potential stigmas of colonialism. VSO Volunteers are currently staffing schools, local agricultural and health organizations and more, returning home with new skills, new ideas, and new enthusiasm. Importantly, VSO and VSO Volunteers became a vehicle for FON to to provide continued financial support in a meaningful, purposeful and directed way.

FON contributes to VSO in two ways. Since 2004, FON has donated money to the VSO Nigeria program. This support certainly fed the nostalgic yearnings of FON’s Returned Peace Corps Volunteer members, and also demonstrated that volunteerism was alive and well in Nigeria. VSO’s program allows FON to sponsor individual VSO volunteers, who provide regular feedback on their activities and lives in Nigeria. This gives FON eyes on the ground perspective that is invaluable for all our philanthropic activities.

Through small contributions by its members, FON has donated some $45,000 to VSO in London to sponsor volunteers in Nigeria. Our 2015-16 sponsored volunteer, Bernie Allen, works as a partner with the Nigerian Ministry of Education to help oversee the management of the National Graduate and the National Youth Corp volunteers. Before serving in Nigeria she was a VSO volunteer in Bangladesh with a strong commitment to overall international service.

In 2011, FON took the next step by opening a greater dialogue with volunteers, inviting them to apply for grants of up to $2000 each to organize and manage small projects that they had identified that could not otherwise be carried out. 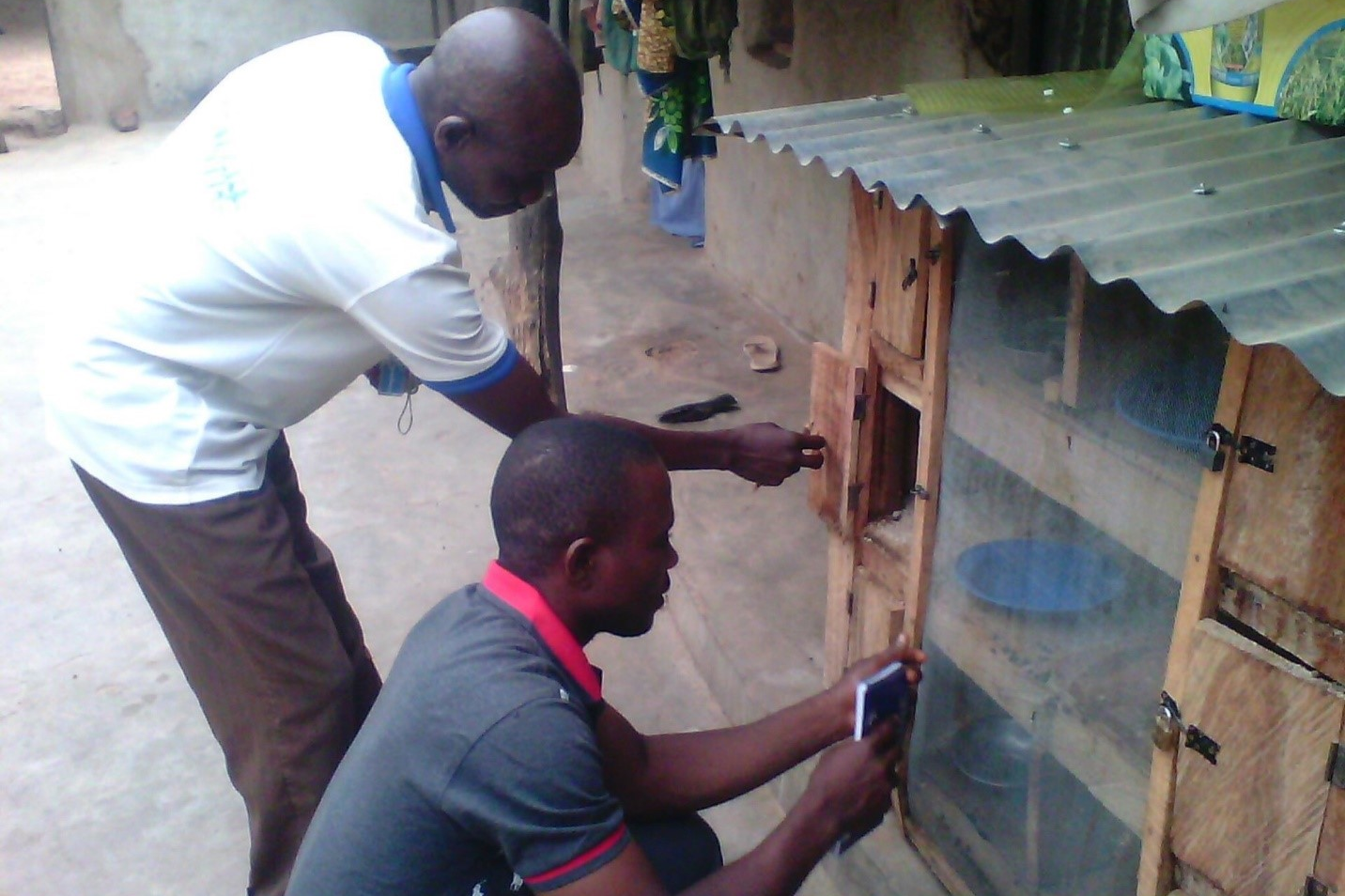 Brian Kuhuni, a VSO volunteer from Zimbabwe, helps set up one of the rabbit hutches resulting from a breeding scheme he developed to help local farmers provide inexpensive and readily available protein to rural residents.

We have funded 15 projects for a total of $25,907 that range in scope from the reconstruction of classrooms and health centers, provision of better rice seed for displaced farmers, the refurbishment of a fish farm, and the establishment of a tree farm. Recently completed projects include girls’ changing rooms in a Muslim school in the north, where a lack of hygiene facilities shamed girls into dropping out of school during their menstrual period. Volunteer Ntawu Moses, from Uganda, proposed the project, completed in late 2015, which identified a previously little understood barrier to female education in Nigeria. Another recent project involved the introduction of a rabbit breeding scheme for farmers, a simple inexpensive source of protein for rural people. Brian Kuhuni from Zimbabwe developed the project, also completed in 2015.

FON is proud to have helped “Keep the Lorry Rolling” by supporting a long tradition of volunteerism in Nigeria with its support of VSO Nigeria. As they leave Nigeria and return to their lives, VSO volunteers are encouraged to join FON.

You can find more about VSO International at: http://www.vsointernational.org/ or VSO Nigeria on Facebook at www.facebook.com/VSONigeria/

Since December 2004, we have been sending donations to VSO in London who then provided us with contacts with VSO volunteers in Nigeria. To date (Fall 2014) we have sent some $21,000 to VSO and in return we have had a number of very good correspondents, some not so good and one who we never heard from at all and apparently VSO had a hard time tracking her down and she was in Abuja. One of these volunteers, Canadian Glenn Dodge, put us in touch with the Fantsuam organization with which we have had an ongoing relationship since 2008.

VSO is now only receiving about one third of its funding from the British government and so is much more dependent on their own fundraising from organizations big and small, of which we are one.

At the end of April this year in London, I met up with Sally Beckenham, one of their community fundraiser. She was very enthusiastic and grateful for our ongoing support of the organization. Beckenham is trying to formalize the Linking programme and sent me a copy of the very impressive final report made by a volunteer who worked as a Nurse Tutor in Malawi. Under the scheme, volunteers are supposed to report on a quarterly basis to their linking organization. All, would be, volunteers have to raise just over $1500 on their own and sponsorship organization are supposed to provide about the $2500 funding. Our contribution in fact just goes into the genera operating account of VSO as it is impossible to direct our funds just for use in Nigeria. Directed fundraising is always a contentious issue.

As Beckenham says: We see volunteer fundraising as an an essential part of the volunteer journey, and in the selection process we make it clear that this willingness contributes to determinations of candidate suitability. Asking volunteers to contribute themselves has a double impact: it provides much needed income for the charity to keep sending volunteers overseas (if we are to receive the current level of DFID grant we need to raise an additional £15 million over the next three years) and it also helps raise VSO’s profile in the community by getting buy-in from friends, family and neighbours.

The VSO volunteer we will be linking with is Bernadette (Bernie) Allen who perhaps can best introduce  herself to us in her own words:

I will be working for 12 months based in Ilorin in Kwara state. My role will be to partner with the Ministry of Education to oversee the management of national graduate volunteers and national youth corpers.  The programme is quite comprehensive. It started in 2007, to recruit young Nigerian graduates in English, Mathematics and Science related subjects. These graduates were posted as teachers in rural secondary schools in the state to compliment government efforts to provide rural education. This programme was successful in establishing a national volunteering initiative and the second phase rolled out in 2012, with future opportunities explored in Nasarawa and Kano with private partners and NGO’s, technical schools and skill building centres.  As well as this, Serving Youth Corp members can volunteer during their national service year in the area of education and agriculture. Current supporting partners are located in Kwara, Nasarawa and Kano.

This is the second time I’ve volunteered with VSO. I spent two years working in Bangladesh a few years ago. I have been completing a BSc Hons in International Studies since I returned to the UK, which, after completing in June, leaves me free to get back into the field and participate in person once again. I am starting another course towards a Masters in Development Management and will sit my exam in April, probably in Abuja, so will have to discipline myself and keep organised to meet my deadlines. I really enjoy study so it won't be too difficult and I have had some experience of study overseas as I completed a couple of courses while in Bangladesh, so appreciate how tricky it can be.

I was born and grew up in a little coastal village in Wales called Fishguard. It has a small ferry across to southern Ireland and is a very beautiful, Celtic, wild and ancient place. At the moment however, I live in a Medieval village in Worcestershire called Alvechurch. I enjoy sailing and have crossed the English Channel, sailed partway across the Atlantic, around various Greek Islands and in and around the British Virgin Islands and Guadeloupe. I love photography and took hundreds of photos while in Bangladesh, some of which I used to highlight the culture and environment by posting them online.

If all goes to plan, our volunteer, Bernie, will leave for Nigeria in December.